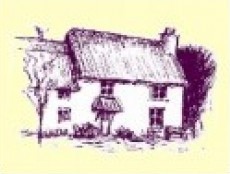 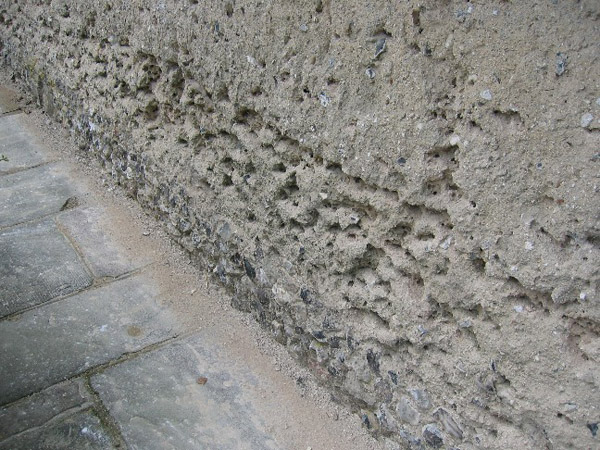 Earth buildings have been traditional in many parts of England over the ages. Here in Wiltshire chalk rather than clay is the basis of the cob. Straw and a touch of water is all that is added to the chalk. All our repairs to cob walls use only these materials and perhaps a lime render if appropriate or a limewash.

Cob walls need ‘a good hat and a good pair of boots’. The hat keeps the rain out of the cob. Traditionally this was thatch but slate or tiles were also used. The boots were generally a brick, stone or flint plinth, which acted as a damp-proof course.

It will always be important to identify the reasons why repairs are needed to the cob. These need to be put right before the repairs are carried out. Leaking roofs, damaged plinths, uplift from trees, raised ground levels covering the plinth, new extensions, doors or openings, new concrete floors or patios, leaking rainwater pipes or ground movement might be the cause.

Recently we have been working on repair where the main damage has been caused by masonry bees and woodpeckers.

Repair can be carried out using cob bricks or blocks. These we make ourselves on site or in the workshop. They have many advantages over the use of masonry bricks or cement. They match the density and porosity of the cob wall so that water can move within the wall in a uniform way preventing erosion around the bricks or cracking if a render is applied. They match the strength of the cob and allow movement thus preventing the harder materials becoming detached. They also fit well within the conservation theme of repairing like with like.

When using cob bricks in a wall that is not going to be rendered, we first cut back the damaged cob. A sound flat surface is prepared. We then bed the cob bricks into the wall using a chalk mortar only and tie them back to the sound cob. The surface is matched to the existing cob by the correct use of local chalk in the cob bricks. A thin lime and chalk render is sometimes added if required. Small holes are filled with the chalk cob alone.
Cracks in the cob are often pinned using helifix ties and then filled with the chalk cob.

Cob walls that are to be rendered are repaired in a similar way. Sometimes some lime is added to the bedding in mortar. The walls are then rendered in lime. One two or three coats may be applied. Alternatively a limewash may be all that is required.

All the rules for damping and suction control are again vital. Hessian and plastic sheeting may be required. Patience is the best way to achieve the perfect repair.